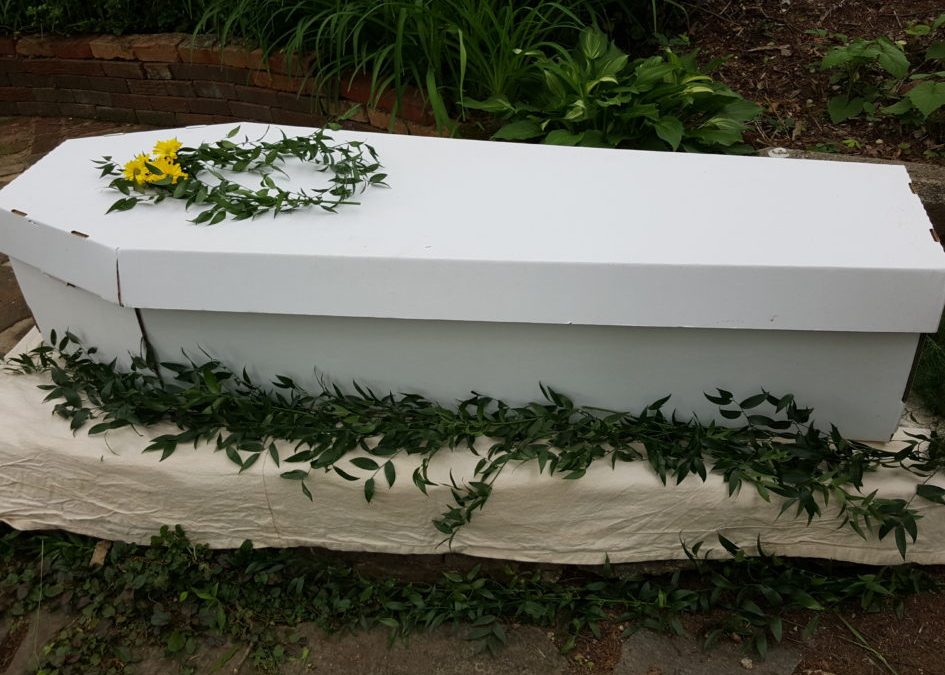 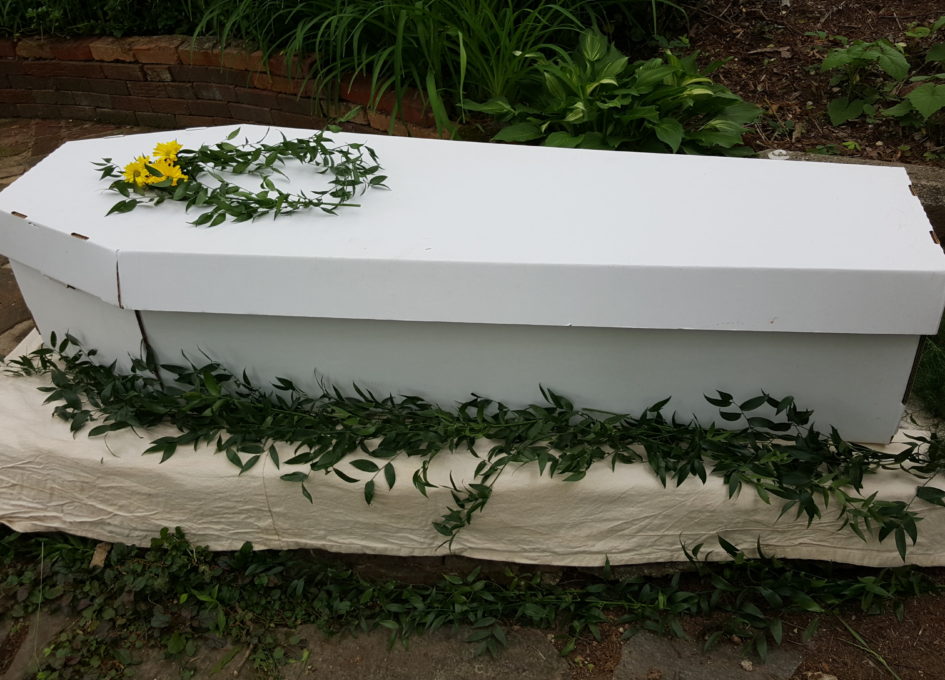 Image of cardboard coffin from https://mourningdovestudio.com/

When I was asked to assist at the funeral of 9yr old Orla Mullins, nearly two years ago, my heart sank with sorrow for her family. What I didn’t expect going into her house was to see a plain white cardboard coffin being creatively and carefully hand-decorated by Orla’s mother, her grandmother, and her sister. I asked Orla’s mum Sharon if she would share her story to move away from a more traditional coffin.

This was as she explained it to me.

When my daughter Orla was diagnosed with a terminal illness at 7, my world was turned upside down. A quick 24 months later I knew I was spending the last summer with my precious baby. And it was during those last few weeks I began to think a lot about her funeral, and indeed I could think of nothing else at times. I needed to plan and organise to keep my mind busy and to keep from sinking into complete despair. So I began researching palliative care and what I could expect from it. I chose songs that I wanted to play during her funeral and decided what she would wear. And I decided which of her favourite items would go in her coffin as well. And then it came to choosing a coffin. I had buried my father two months previous to Orla and looking at the choices available I desperately needed a sign from him that “this” would be the one, whatever that one was. But all I could find appeared to be cold, dark, and melancholy. In the end, we chose one that was named “Stanley” which was the name of the company my father had worked for most of his life. And I felt it was the sign we’d be looking for. When it came to Orla I wanted to be prepared, I wanted her final resting place to be like her, quirky and funny. Something just for my little girl. I wanted something pretty and girly, not dark wood or cold brass handles. I wanted something very personal so that her last send off was about and between, her and I, together, no one else. It seems to me that a lot of people are feeling the same way and the variety of different coffins available has increased immensely in the last few years. There are wicker, wool, and bamboo even, just to mention a few. And then there are Eco coffins and cardboard varieties. And it was whilst I was browsing that I noticed a “decorate yourself” cardboard coffin. I knew straight away that this was what I was looking for. It could get any more personalised than this. When the day came, and Orla passed I was dreading the coffin arriving. I simply wasn’t ready for her to leave her bed, her room. The coffin was placed on wheels in my kitchen, and suddenly the blank white box I chose seemed like some mammoth task that I had to undertake when I was at my lowest. When we were all at our lowest, to be truthful. But it had to be done, so we began drawing, painting, and sticking. What I never imagined was how therapeutic and calming it would be. All three of us put Orla’s favourite characters, pictures, and sayings around the sides of the coffin. Our two cats meanwhile climbed on top and inside, also wanting to be a part of it. We played loud music that Orla loved. We played loud music that Orla loved, we reminisced about the past, we laughed, we cried, we drank and we even danced over the following twenty-four hours in our kitchen in between popping in to see Orla in her bed in the next room.

By the time her carriage was ready (we no longer viewed it as a coffin) we were ready to say goodbye to our beautiful girl.

All three of us felt that we had done her proud and that she would have been happy.

Orla had no big funeral, no traditional wake, just very immediate family. She was a very special girl and never liked people around her. So our work was not to be paraded about, but then that was never our intention anyway. We just wanted a more personal resting place but what we ended up with was an amazing experience none of us will ever forget.